OK, I sort of feel like scones get a bad rep in this country… if you go to the UK, scones are synonymous with high tea and other delicious treats but here? If I mention scones to anyone they usually respond.. “Oh.. I don’t like scones.. they’re SO dry!?”  (that is actually a direct quote from my mother before I force fed her one of mine.. more of that later..)

Well, then I officially make it my sole mission in life (I’m lying) to change people’s minds about scones! Because they are OH so good, and another one of those really versatile foods: impress your friends at brunch, eat them in your pjs or serve them with coffee/tea!

For whatever reason- scones were one of the first thing I tried to master at baking 4-ish years ago when we were living in Savannah.  We’d just married and moved into a house I LOVED so we’ll blame nesting!  I stumbled upon a very basic scone recipe on allrecipe which can be found here . Well, my husband and I loved these so much I actually made them one night as a side with our dinner!! I felt so FANCY… I made SCONES from scratch good Lord watch out!  But, much to my dismay, I suddenly realized I couldn’t convince other people to try them because I was always met with “I don’t like them…they’re dry…” so.. you see.. I had no choice but to start forcing them on my house guests, like my poor parents!!

As I got more comfortable with the science of baking, I wanted to go back to this old favorite and see how I could amp it up a few notches! And that truly is the beauty of something like a scone- there are ENDLESS ways to customize and make it your own! And this cherry scone recipe is seriously delicious!! The cherries pop in the buttery layers and almond extract is a literal match made it heaven with cherries so the addition really takes the flavor to another level…. let’s get to it!

Before we start I need to tell you the name of today’s game: keep your ingredients cold!! When I used to read that in recipes I was like yeahhh suuure.. but no, it is so important especially when it comes to baking something like a scone.
When you bake something that has cold butter going into the oven, the butter melts and creates these wonderful pockets that make your finished product light and flaky! The second time I tested this recipe it was almost laughable because we don’t have AC and it was 90 degrees out (what was I thinking??) and I could barely keep the dough together because everything was so warm. Don’t suffer like I did- keep it cold! 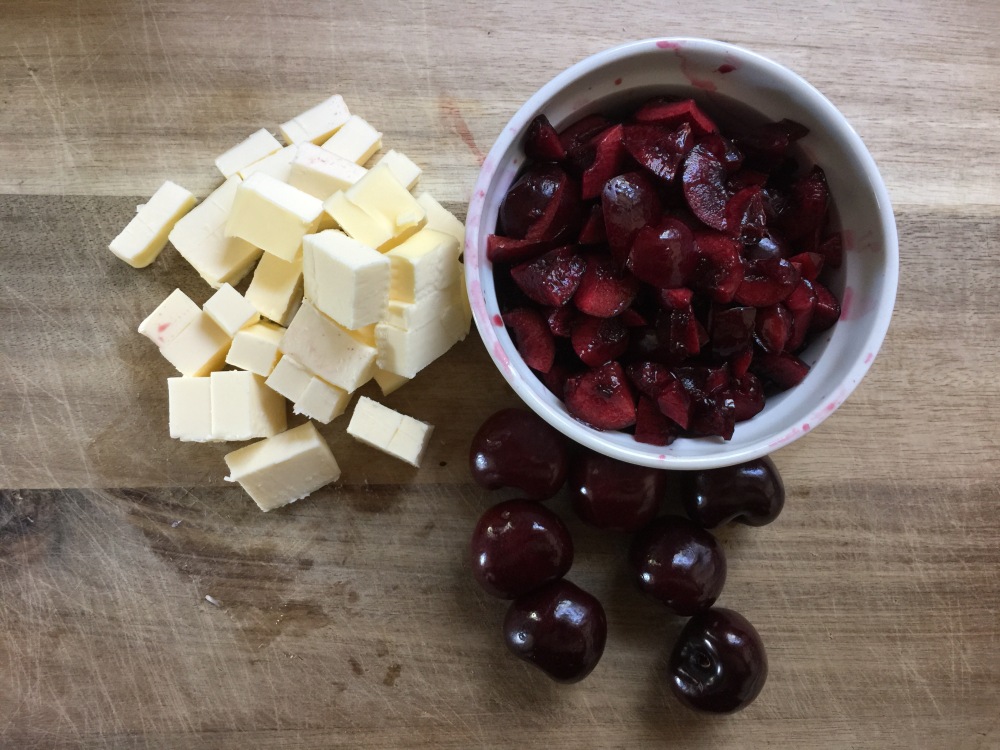 Step One: Preheat your oven to 425.  If you have a cherry pitter, you’re going to want to break that bad boy out! If you’re like most people… you probably don’t have one and this step will take a little longer.  You want to cut the cherries in half so that you can get the pit out and then chop the cherries roughly so they appear like the above. Set aside in the fridge until you need them.. the name of this game is to keep all of your ingredients VERY cold.

You could use frozen cherries if you wanted and thaw them out. You just don’t want them to be super watery- which I feel like can happen when dealing with frozen cherries so pat them down with a paper towel if neccisary!

Step Two: Combine the flour, sugar and baking powder in the large bowl attached to your standing mixer (if you have one) and whisk together with the paddle attachment 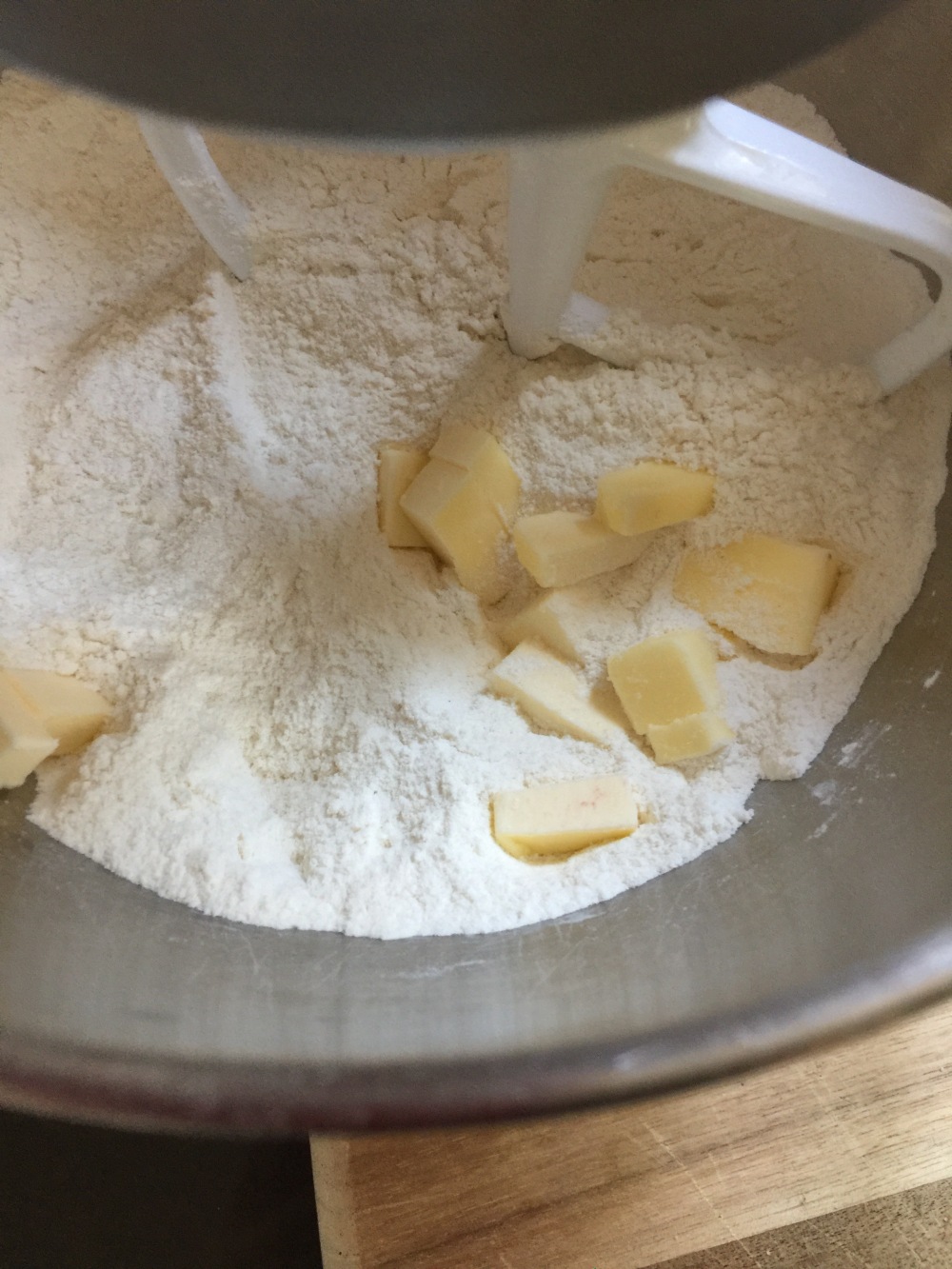 Step Four: Measure your milk and then add the egg and almond extract into the measuring cup and whisk until the liquid is combined.  Slowly pour the liquid into the bowl with the mixer on low until it’s incorporated together with the dry ingredients and looks like this:

You’re going to handle the dough with your hands so it’s ok that it doesn’t come together in a ball. You don’t want to overmix the dough- that will result in a tough scone. This dough will be very sticky, so just flour your hands as you scoop it out and put it onto a floured surface : 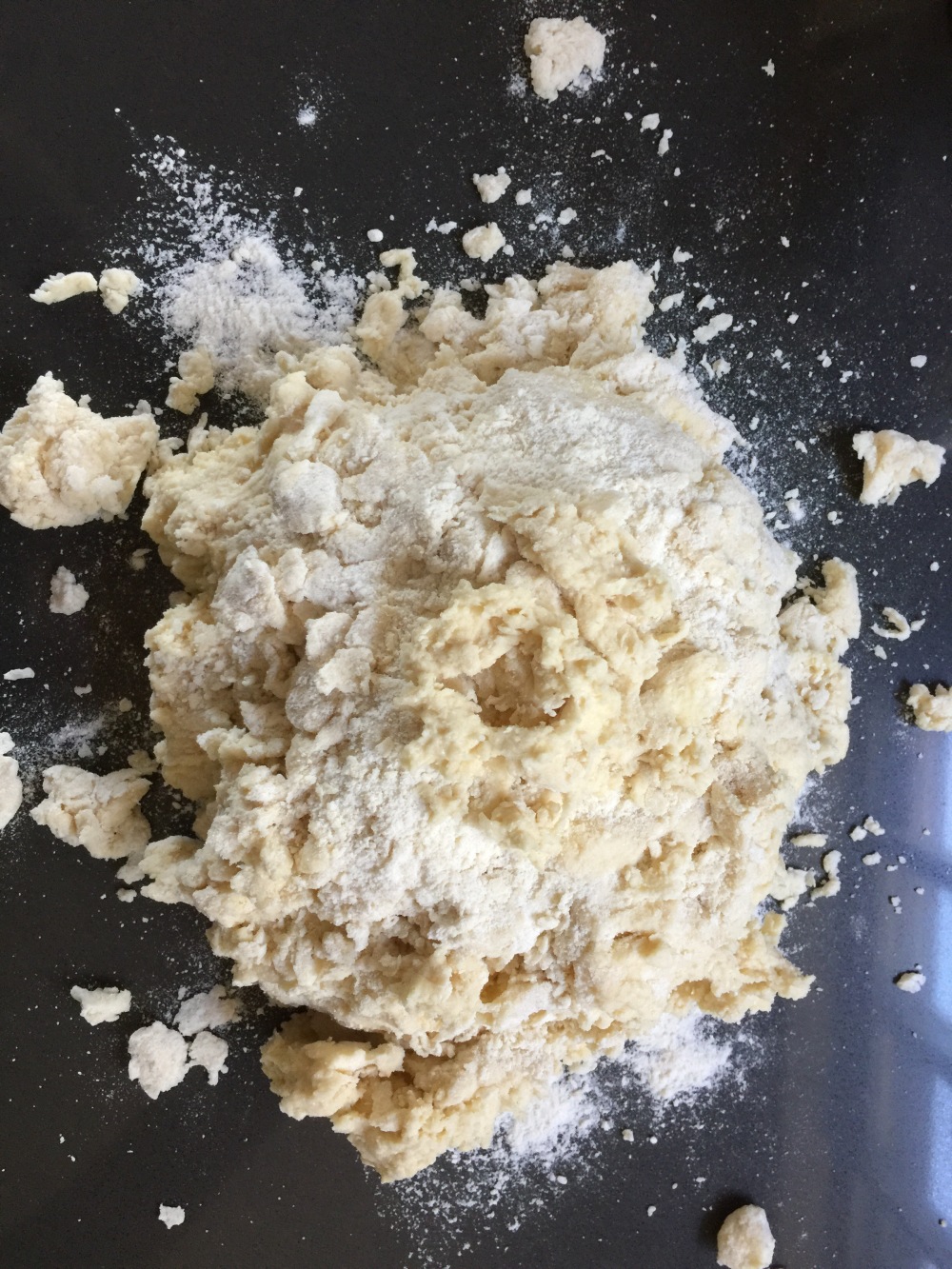 Step Five: Kneed the dough gently so it comes together and fold it over on itself a couple times. This helps build layers of flakiness later! As best you can flatten the dough into a rectangle and pour the cherries on top. Gently press them into the dough:

Step Six: Gently roll the dough over itself a few times until it’s in a log like this: 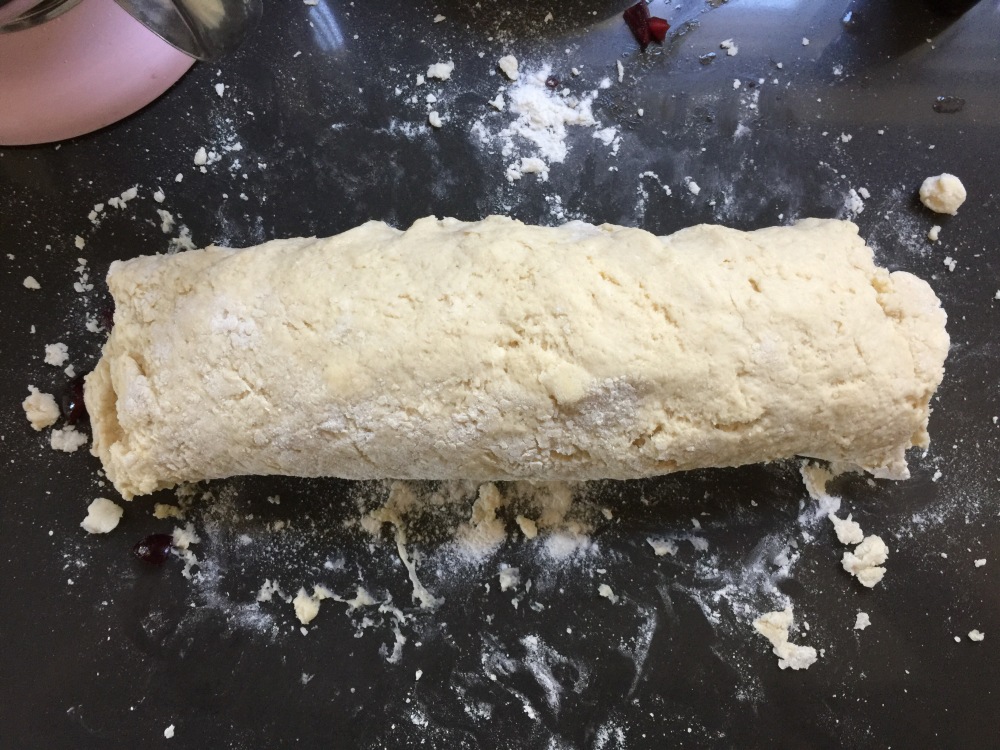 Why do this instead of mixing the cherries in with the wet ingredients? The dough is thick and you’d really have to work it to get the cherries evenly distributed and the more you mix the dough the more dense it will become. This allows them to be throughout the dough without compromising the light flakiness we’re going for!! WIN!

Cut into 8-10 triangles and put on a greased or parchment lined baking sheet. 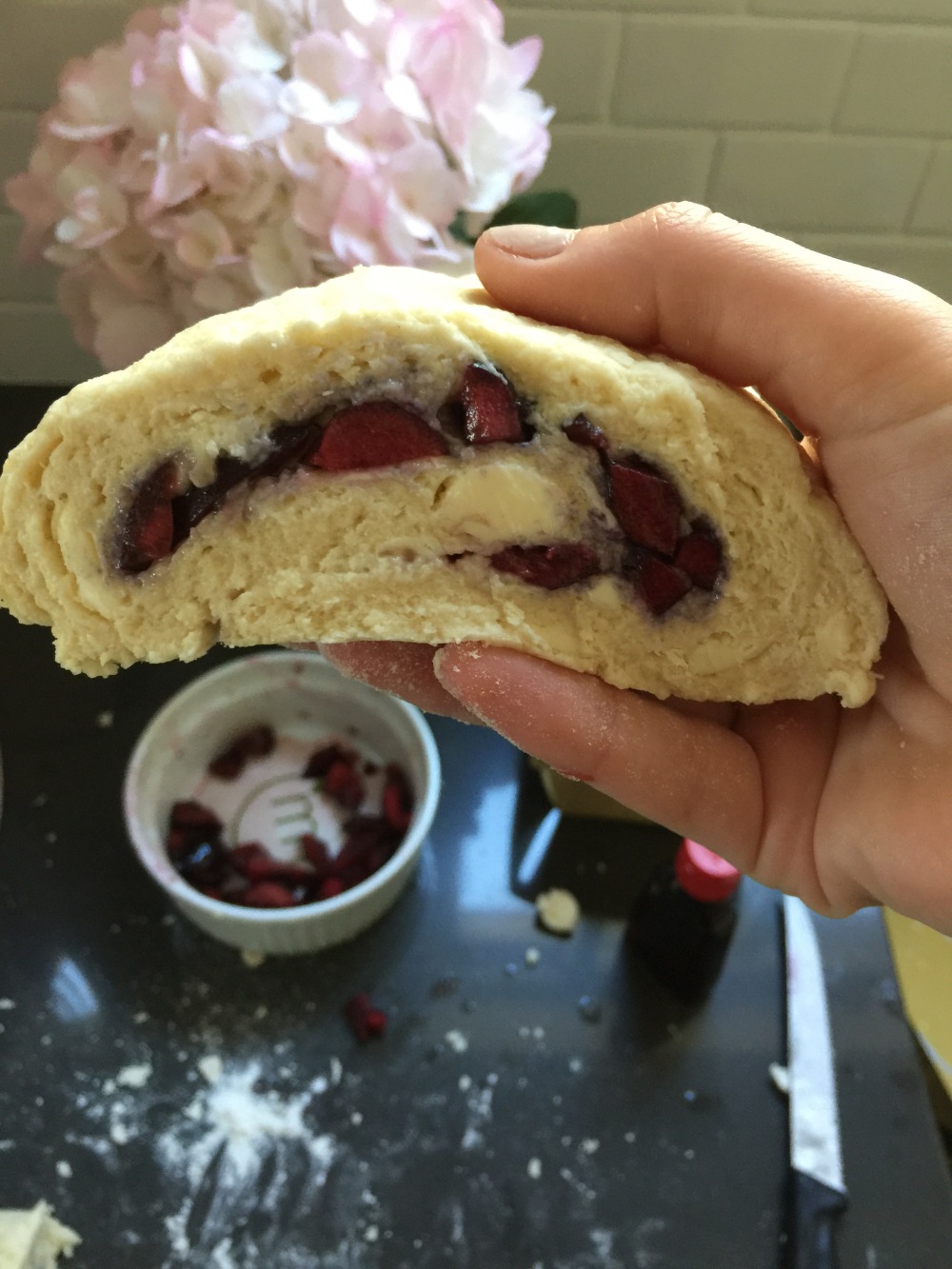 Look at those layers!! That’s exactly what you want!

Step Seven: Make an egg wash by beating 1 egg and a splash of milk and cover the tops of the scones with the wash. This will create a golden crust which will be a great contrast to the soft middle! Sprinkle on course sugar .. because why not! 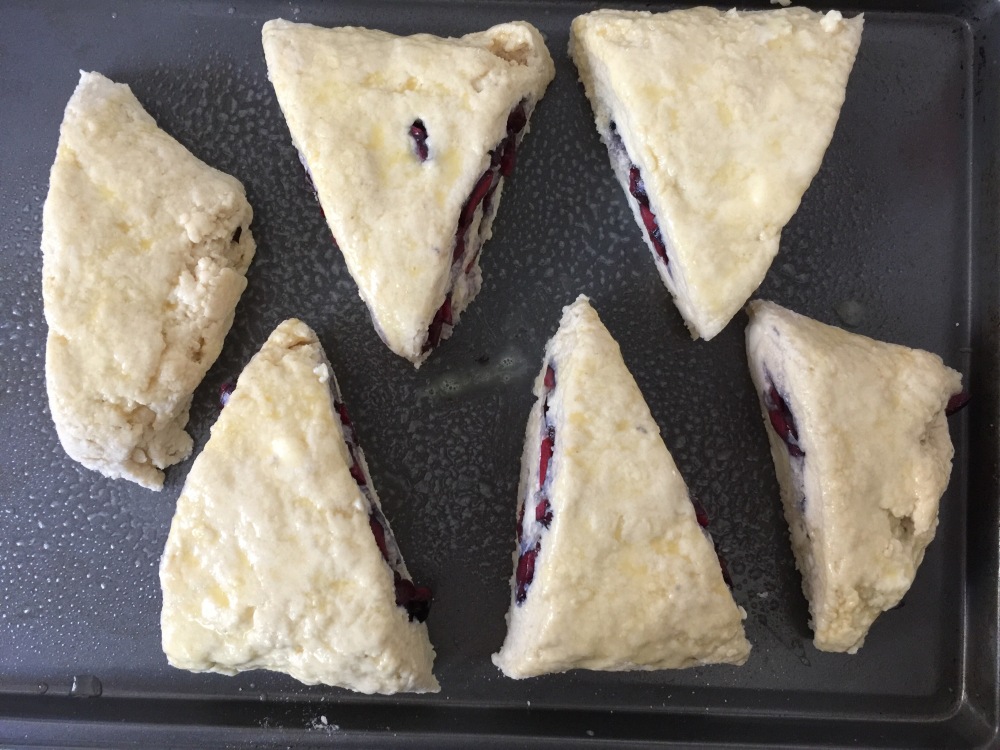 Step Eight: Bake in the oven at 425 for 15-17 minutes. I give the range because ovens really vary so you’ll just want to watch and take them out when the tops are golden!

Look at these beauties!!!